Back to all posts

Interview for The Copyright Coalition 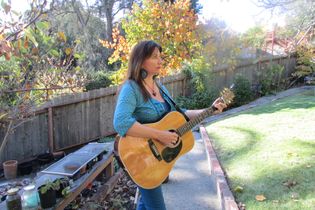 This week we would like you to meet one of our Individual Creator Members, musician Clara Bellino.

1. What was the inspiration behind becoming a musician? What do you enjoy most about the creative process?

I have a clear visual image as well as recollection of the feeling I had at age 3 when listening to what was coming out of the speakers in our living room: I realized that music had the power to transform my experience of the moment and transport me elsewhere. At 7 when asked what I wanted to do with my time I said I wanted to play music and start with the piano. What I enjoy most about the creative process is setting words to music and finding a melody that sticks.

2. What do you think is the biggest misconception about your line of work?

I don’t know what the biggest misconception is, but the one that bugs me the most is the idea that being an artist and making music does not deserve compensation like any other job. There is this idea that writing music is more of a hobby that makes life enjoyable and that artists are forever on vacation. I am grateful for any talents I have, and believe that being an artist is a calling that won’t let go of you. Like any other passion though, it takes dedication and sacrifices to see the light of day, and what is created has value.

3. When did you first become aware of copyright and why?

I first became aware of copyright in 1992 when I was asked to contribute songs to a film I had the lead role in. I played a singer on her way to Japan. We recorded a song I had already written, I wrote a new song that was based on the experience of my character, and I co-wrote a song with the musical producer of the film, I wrote the lyrics, he wrote the music. I was informed by the director of the film that for my songs to be included in the feature I needed to copyright them and affiliate myself with a Performing Rights Organization, as well as start my own publishing company.

4. Have you experienced copyright infringement and if so how has it affected you personally and financially?

Yes I have. The first time was through a local online company that had an app that facilitated video editing. They also offered a whole database of songs they claimed to have the right to use so their clients could add music to their videos. One of my albums unbeknownst to me was there. I found that out because a young lady had chosen one of my songs to accompany a video of a soap opera star she had a crush on. I didn’t think my song was particularly suited to…the visuals. I first contacted the young lady, who refused to believe I was the writer, even though my name was in my e-mail…I eventually managed to have the site remove my titles. I then became aware of many online addresses monetizing my songs, some as ringtones.. For a while once a month I scheduled contacting companies that monetize my music without my permission, and would send them my attorney’s letter. And found out that not only they acted like they didn’t have to prove that they had the right to use my songs, they asked me to prove I was the rights holder. If I managed to get someone on the phone, they rarely felt under any obligation to address me or didn’t understand why I had a problem, or acted as if they didn’t. How has it affected me? Personally: I don’t have the time to contact all these sites. I have decided to build my own tribe of supporters, patrons who support the arts, and are happy to pay me for my compositions. I’m not buying into the “Exposure” model, you can die from exposure! Financially: it’s hard to say, except that my royalties have taken a nose-dive over the years. It has become more challenging to make money from the sale of my music. I was able to reimburse the cost of my 2006 release by selling 10,000 or so hard copies of it over a little more than a year. That was not possible for my 2012 release, which I am almost done paying off. We ran a successful crowd funding campaign in 2015 which so far has covered the recording of half of the songs for my upcoming 2017 release. Clearly if someone I don’t know can get my songs for free, or as part of thousands included in a small subscription fee..that compensation isn’t coming to me. So I’m building my own economy.

5. If there was one aspect of the copyright law that you could change, what would that be and how would you change it?

I would like each digital version of each of my songs to have an assigned code embedded, that moves forward by one number each time it is bought. Any buyer could play that song for anyone they chose but their unique code would be non transferrable. For use in films or broadcast, the code would come with a possibility of renewal, but expire after a certain time or number of listens. I would set my price, and it would be my prerogative and/or problem if I priced myself out of the market. I like the analogy that my songs are like cakes. When a baker bakes a cake, to eat his or her cake you have to go to his or her shop and buy the cake. One last note: though I am a part of, and support and respect the work of “The Content Creators Coalition”, I resent the term: “Content Creator”. I don’t wake up each morning, or go to sleep dreaming: “Let me create some content”. I wake up or go to sleep dreaming I will write my best song ever. “Content Creator” is so clinical, cold and technological…no matter what art form it refers to.